Where are the best gluten-free chicken nuggets in Connecticut? They’re hiding in plain sight, at Garden Catering.

Garden Catering is a fried chicken joint. Actually, it’s eight fried chicken joints, with six locations in Connecticut and two in New York.  We hate to call it fast food, because it’s better than that. But you do order at the counter to either eat in or take home. Two of the Connecticut locations – Fairfield & New Haven, maintain dedicated gluten-free fryers for nuggets, fries, and potato cones.

Potato cones? Imagine mini pinecones made from potato, perfectly crispy on the outside, and soft inside. Then dip them into any of 8 sauce options, all gluten free as well. The nuggets, which can be purchased by the pound, half pound or less, look and taste like the “real thing.” You’d never know that they were gluten free, and the fries are excellent.

The menu consists of multiple nugget/fry/cone options, all cleverly named, along with GF wraps, salads, and milkshakes. They also offer cauliflower nuggets, however, they don’t have a gluten free version of those at the moment.

Having a party? Garden Catering caters!  And for hardcore nugs, they also have an app. We’re just hoping that they continue their stretch north, into the rest of Connecticut and New England! 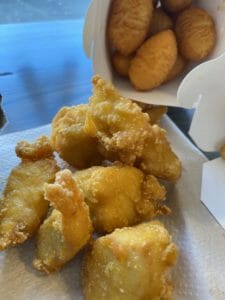 *Garden Catering works hard to avoid cross-contamination, but is not a dedicated gluten-free facility. Always use your own judgement when eating out.